My beloved MacBook Pro 13" mid 2010 is nearing its end of life as Apple is preparing to halt any support for macOS 10.13 High Sierra and as much as I hate to, I will have to replace it by the end of 2020. It might seem odd it's still my main machine but having upgraded it with a fast SSD and 10 GB of RAM a few years ago, I still find it capable of handling my everyday web development needs.

So what is my dream replacement machine? Honestly, if Apple offered today the same laptop with up-to-date internals, it would be an instant purchase for me. Just give me the same enclosure, ports (I wouldn't mind if you swap the FireWire for USB-C), keyboard and I would be more than happy. I don't even care about the screen, I use an external monitor most of the time.

The keyboard alone deserves a separate paragraph. I have never used an external keyboard and you can imagine how much beating mine has seen in 10 years. And add to that a couple of times my little son forcefully disassemble many of the keys (the Space bar is hardest to reassemble BTW 🙂 ) and still to this day not a single key has failed!

But no, Apple seems to have a different opinion. And I honestly have no clue why they chose to break and cripple something that was not broken. Not broken at all. Soldered RAM, even soldered SSD (is this a joke?), a single port type, no MagSafe (this thing has saved my laptop from dents at least a dozen times), stupid experiments with a rock-solid keyboard (hopefully, they got it right finally). I mean if this is some kind of smart phone-like consumer device, I could understand but you still dare to call this a professional laptop? Sorry, I'll pass.

I've already ordered a HP ProBook 430 G7 which offers practically the same upgradability like my MacBook Pro mid 2010 - 2 RAM slots, SSD slot + 2.5" HDD slot I will gladly use for a backup drive (I like keeping my private data "private" instead of storing it somewhere in the cloud). I don't need a beefy GPU so the integrated one will do just fine. It has a touchscreen and that's always handy for testing. Honestly, I just hope the keyboard is reliable enough, everything else is ideal for me.

Of course, the main thing I will miss initially is macOS but switching to a new platform was not a big issue last time. Ten years ago I went from Windows to Mac. I am certainly never getting back to Windows considering what a complete mess it is today. Honestly, in 10 years I feel like it's only gotten worse, I can't even stand looking at Windows 10's interface mess. UI consistency is arguably not great on any platform but to me it feels like in Windows 10 it's a whole new level of inconsistency.

So it's Linux for me this time and Pop!_OS is my initial choice. I've never used Linux for work but I've played with many different distros through the years and configuring a work station will not be a problem. What does a web dev need today anyway - a terminal, a text editor, a browser, some collaboration app?... It's all there.

After about a couple of years in planning & development SmartMenus jQuery is finally available! Website menus that work on all devices.

After hard and long resistance, I finally gave up and recently signed up for Facebook. I am still not excited about it and quite deeply believe it can mainly bring negatives to people who post all kind of personal stuff. But anyway, since I am using it already from time to time, the single most annoying thing that caught my attention immediately (in the otherwise clean and arguably intuitive interface) was the fixed positioned chat box at the bottom of all pages. There was simply no way to remove it even if I didn't want to use the chat at all. And guess what, it seems the past few days that small collapsed box at the bottom has been transformed into a complete sidebar pushing the rest of the page to the left which is even more annoying (this seems to happen if the browser window is wide enough). Me doesn't like this at all so I am now sharing my solution to this annoyance with you...

Just install this small user script in your browser (Opera, Chrome, Firefox via Greasemonkey or Safari via GreaseKit):

and remove that chat floating box/sidebar for good! As a bonus, it will make sure you always appear unavailable for chat. Second bonus - when the sidebar is removed, the rest of the page will be perfectly centered in your browser window again. Yay! 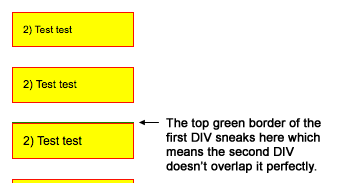 I am getting more and more used to #NewTwitter and generally like the new features. Particularly the details pane, which provides quick preview of images, videos, etc. is really very useful. However, there is something related to it that annoys me much - if you scroll it with the mouse wheel (which is definitely the case with the majority of users) once you reach the top or bottom and continue scrolling (e.g. by accident, which happens to me very often), the whole page begins scrolling and you can easily lose sight of the tweet on the left to which the pane is related. So I am now sharing a simple fix and if you like it, please help to let the guys at Twitter know about it.

First, a very quick demo of what I mean:

And the JavaScript/jQuery snippet which fixes the issue:

It just checks if the top or bottom of the details pane has been reached and when it has, the default action the mouse wheel event triggers (i.e. scrolling the whole page) is prevented.

If you would like to test the fix on your own, just load some Twitter page in your browser, then copy/paste the following code in your browser address bar and hit the "Enter" key:

And for a permanent fix, until eventually Twitter fixes the issue, you can install the following user script in your browser (Opera, Chrome, Firefox via Greasemonkey or Safari via GreaseKit):

If you find this fix useful, tweet about it so that it can reach the guys at Twitter and they consider using it or a similar solution.

Well, that's all I can do about it.

Zoom Image is small user script I originally wrote back in 2005 for Greasemonkey and Opera but nowadays Chrome (out of the box) and Safari (through GreaseKit) users could use it too. The basic idea is pretty simple - the script displays a small toolbar with some buttons in the top left corner of any image when you hover it allowing easily to zoom in/out just the image without the need to zoom the whole page.

It may seem a pretty insignificant addition to your browser's features at first sight but, at least for me, it has proven to be a really handy one and I have not stopped using it in my main browser (Opera) since I first wrote it. BTW, the original version of the script was featured in Mark Pilgrim's Greasemonkey Hacks book which means at least one other user found it useful. 😀

Anyway, I am now publishing v2.0 which brings some nice improvements over the previous release.

The script includes the following options which you could tweak to your liking:

As mentioned, the script is now rewritten and allows more easily adding custom buttons to the toolbar. You can create a custom button like this:

And then append it to the toolbar like this:

Here is a quick example how to add an "open" button which when clicked, loads the image in a new blank browser window:

I have added this button at the end of the Zoom Image code as well as another button "size" which when clicked reports the original dimensions of the image in a JavaScript alert popup. These buttons are disabled by default (the code is commented out) but you could enable them if you like.

Here is a direct link to the latest version available in the code repository:

The code is hosted on GitHub: